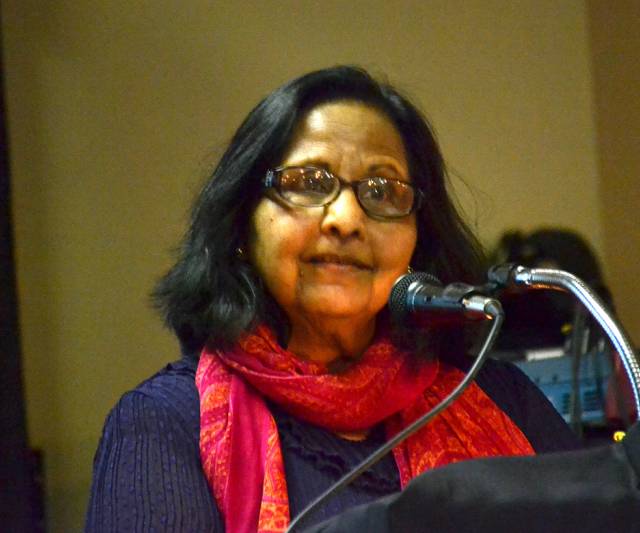 Founding President of the United Nations Association Quinte Branch Dr. Aruna Alexander was one of the participants of the “Standing Together Against Racism” web forum, hosted by Loyalist College on Thursday afternoon. INQUINTE.CA FILE PHOTO

It’s time to stand up and have a voice to not only protect racialized people in our communities but to create a better, more inclusive future for all of Quinte.

That was the general message coming out of the virtual “Standing Together Against Racism” web forum, hosted by Loyalist College on Thursday afternoon.

The webinar featured a panel discussion on shared experiences surrounding racism and ways to improve the situation locally, involving a group of prominent people of colour.

Loyalist nursing graduate, former member of the College’s Board of Governors and ex-Belleville councilor Georgina Thompson moderated the discussion.

The conversation was born out of recent acts of violence surrounding black men and women, namely George Floyd’s killing in May, the shooting of Breonna Taylor and Jacob Blake in the United States, and, closer to home, the death of Regis Korchinski-Paquet in Toronto.

Ferro started off the discussion by pointing out that Canada is not immune and not new to the issue of systemic racism and in fact, various laws, establishments, and regulations have played roles in racism throughout the country’s history, right from the beginning.

He outlined specific moments of history that can be learned from by modern-day people, including the “Chinese Head Tax” put forth in the early days of confederation for Chinese immigrants who were building the railway system in Canada and the prohibition of the selling of land to people of colour.

Jarvis, who was one of the organizers of Belleville's march and vigil of solidarity earlier this year, stated the Quinte community is “no longer a predominantly white community and that institutions should be “ahead of the curve” with web forums such as this, and not organize them after a black person or other racial minority dies.

As part of the Belleville Inclusion Committee, which has been around since 2014, Dr. Alexander stated their commitment is to give citizens a voice with anti-racism initiatives and decision-making, support measures to challenge racism and discrimination, promote diversity and equal opportunity in the education sector and promoting respect, understanding, and appreciation of cultural diversity.

“If people do not see a black or brown person in a position of power, they will never have a chance to update their beliefs,” said Alexander.

In sharing her experience with racism in the community, Alexander stated she was verbally attacked by citizens outside a local grocery store and told to “go back to the country where you came from.”

“We need to collect those narratives, we have the evidence that is important,” said Alexander.

“We need to be the change we want to see in our communities.”

She stated changing of practical beliefs starts with one's self and said community leaders should be encouraged to take an online implicit association test.

"This could have a tremendous impact on our community," Alexander stated.

"With the new realization of their own unconcious biases, leaders in our community can take the next logical, positive, moral steps to counteract the racism they see in our communities and in our organizations."

Thompson stated she has also experienced subtle racism in her past career as a healthcare professional, particularly when she went to apply for positions on hospital boards and committees.

“I’ve been told there’s people with more experience than me, even though I’ve had a lot of background experience in health and health administration,” Thompson stated.

“So, I had to ask ‘what do you mean by that,’ and I never really got an answer back.”

“There is racism in this community. Whether you want to believe it or not, it’s here…we need to address the community. We can’t be afraid to say it.”

Jarvis wholeheartedly agreed, saying uncomfortable conversations need to be had in order to take steps towards solving the problem of systemic racism

“We have to get over this fear of talking about race and accept that it’s uncomfortable, but also accept that it needs to be done.” said Jarvis.

“If we keep letting the fear keep us down and push us into the background, there’s a good chance we could end up like the States, with murders and police thinking that they can continue discriminating against someone solely based on their colour."

Jarvis stated she faced discrimination growing up through her elementary and high school days in Frankford, noting one particularly disheartening incident where her Phys-ed teacher in Grade 9 called her a disparaging nickname related to her skin colour, “Black Syd,” despite the fact that she was not of African descent and she was the only person named Sydney in that class.

Eventually, she said she took action out a proposal aimed at attempting to combat racism, but was shut down by her school’s principal, leading to her “fading in the background” and not sharing her views with anybody.

She added there have also been times where she’s been followed around if she is in a store or walking down the street alone, but not when she is with her partner, who is white.

Fortunately, she stated the move to Loyalist College really opened her eyes to a new, inclusive world, with several international students making a home on campus – and it’s given her more confidence to openly identify herself as a woman of colour.

Loyalist President Dr. Ann Marie Vaughan stated the college is a welcoming place, but there is still lots of work to be done to have the campus community becoming inclusive, pointing specifically to commentary surrounding the international student that had tested positive for COVID-19.

The panel also discussed the formation of a "Standing Together Against Racism" group that would work collaboratively with the existing Inclusion Committee and get in touch with other area groups tasked with community safety.

Alexander stated the group will need an independent research survey providing data that proves or negates that there is racism in the community and also suggested sub-committees to get more community residents involved.

Ferro explained an initiative, called the “Situation Table” that connects social service agencies (i.e. Victims Services, Highland Shores Children’s Aid Society, Addictions and Mental Health HPE, etc.) with police and people who may be struggling would be a better alternative than strict enforcement.

“We could have a group of people (from these agencies) go together, talk to the family, explain the options they have and try to help them,” Ferro said.

“This is a different approach then just having the police go over there in the middle of a mental health crisis, where it could escalate and lead to a bad outcome, which we’ve seen in larger cities.”

Details of the group will be worked out at a later date.

Regarding what non-racialized people can do to combat racism in the community and beyond, all panelists agreed that these people need to be allies and have a voice for people of colour, both in-person and online.

“It’s okay (for white people) to speak out, be an ally and work in co-ordinance with people of colour,” Jarvis stated.

“We don’t want a separate entity, we want the community to come together. It can’t just be people of colour on this committee. We don’t want it to be a ‘they versus them’ situation. We want everyone in the Quinte area to feel like they can take part in this committee.”

Ferro pointed out the amount of severe hate in the virtual world on social media and stated non-people of colour can speak out and convey an educated response to people who are criticizing immigrants or racialized people.

In conclusion, Thompson stated that the forum was not meant to cast every non-person of colour as racist, but instead to focus on pockets of people who display ignorance to other cultures and educate them.

"We have a responsibility to end systemic racism, to keep having these hard, often uncomfortable discussions, to challenge the way we think, behave, and treat one another.

Around 200 people reportedly listened to the conversation.