Earlier this year, Dr. Ruth Mathieson (R) was awarded the Ontario Medical Association’s presidential award for her dedication to humanitarianism. Here she is pictured riding a bike at the Community Health Program in Matangwe, Kenya. Facebook Photo. 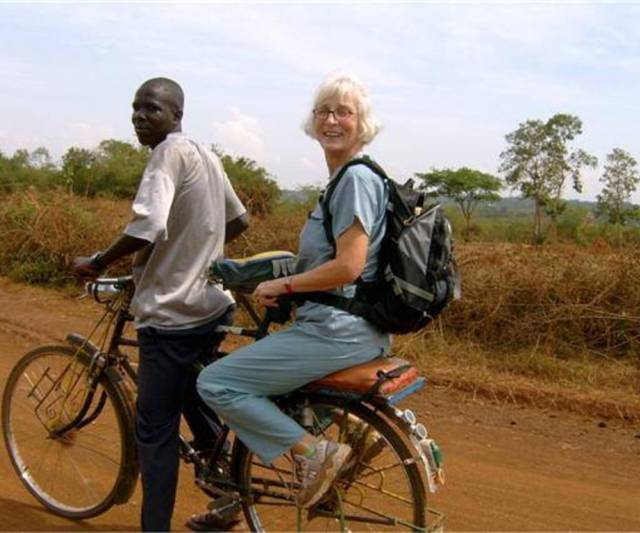 Earlier this year, Dr. Ruth Mathieson (R) was awarded the Ontario Medical Association’s presidential award for her dedication to humanitarianism. Here she is pictured riding a bike at the Community Health Program in Matangwe, Kenya. Facebook Photo.

A local retired doctor is this year’s recipient of the Ontario Medical Association’s presidential award.

The OMA’s Presidential Award was given to Dr. Ruth Mathieson, of Belleville whose humanitarianism spanned four decades serving patients at a 100-bed mission hospital in Nigeria and at an HIV-AIDS clinic in Kenya, where she worked by the light of paraffin lamps and slept in residences whose roofs were inhabited by bats, the association’s website stated.

The Presidential Award is awarded in recognition of exceptional and long-standing humanitarian service to the greater community (in Ontario or elsewhere) that brings honour to the medical profession. The award recipient by their actions expresses the highest qualities of service by a physician that we all admire.

An online presentation of the award was held earlier this year.

The evening’s co-host, Dr. Sohail Gandhi, who is also past president of the OMA said the most common admissions were adults and children with cerebral malaria.

"You can just imagine what she saw when she was there," she said.

Dr. Ruth Mathieson studied medicine at the University of St. Andrew’s in Scotland, graduating in 1964, the association's website reads.

Her house jobs and obstetrics training were completed at the Radcliffe Infirmary, and she received pediatric training at Vancouver General Hospital from 1968-1969.

Mathieson worked in England as a general practice locum in Bermuda and Germany as a general resident before settling in the Belleville area in 1970. From 1970-2019, she had admitting privileges at the Quinte Health Care, Belleville site. Mathieson practiced family medicine from 1970-2004. The additional training she completed in pediatrics and obstetrics provided a good foundation for family practice because it allowed her to look after patients from birth to death and everything in between. Mathieson performed deliveries of her patients and other G.P.’s, as well as practicing palliative care. She was also the medical supervisor of complex continuing care for several years.

After she retired from family practice, she practised palliative care at Belleville General Hospital and Hastings County.

For the past several years Mathieson has worked part-time as an assistant in the operating room. Mathieson has volunteered in Nigeria, Guatemala and Tanzania, but mostly in Kenya. She worked at Matangwe Clinic/Hospital in Kenya from 2005-2015, relieving the clinical officer for a month. In this role, she mainly treated HIV/AIDS patients, as well as cerebral malaria and other tropical diseases. She made life-long friends there and continues to help them financially. Mathieson has loved being a physician, the website noted.

For the 100th year, outstanding physicians, residents, medical students and community leaders have been recognized for their remarkable achievements and contributions to the medical profession, health care and patients through the Ontario Medical Association’s Awards. At the OMA’s vitrual Annual General Meeting, 67 recipients were honoured, including those who have spent their lives dedicated to caring for others and those whose career as a physician is just beginning.

This year, there were 25 recipients of the OMA Life Membership, awarded to those who have made an outstanding contribution to the work of the association, the medical profession and medical science, or the common good.

Over the century, thousands of people have been recognized with an OMA Award for the unique stamp they have made on health care in Ontario, the association said online.

Catholic board seeks input on preferred format for next semester inquinte.ca/story/catholic…